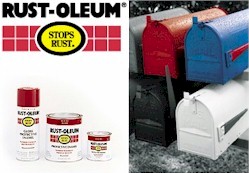 This observation inspired the Captain to create the world's first rust-preventive paint. But it wasn't easy. After settling in New Orleans, Captain Fergusson spent years of painstaking (and smelly) research in an attempt to formulate a fish-oil-based paint.

Finally, in 1921, the Captain got a whiff of the sweet smell of success. He perfected a paint that stopped rust, dried overnight and left no lingering aroma. Rust-Oleum Corporation was born.

Today, Rust-Oleum Corporation, backed by the resources of our parent company, RPM International Inc., is a worldwide leader in protective paints and coatings for both home and industry. Besides our famous rust-fighting paints, our products range from decorative American Accents® paints to durable industrial roof repair coatings. After 75 years, Captain Fergusson's spirit of innovation, determination and commitment to quality lives on at Rust-Oleum. And if you want proof, just take a quick tour of our site.